It looks like you are using an old version of that we no longer support. Please update your browser to continue using Grok Learning.

Uhoh! Your network appears to be blocking WebSockets. Grok Learning will not function correctly without WebSockets.

Please click here to open our network blocking debugging page in a new window. You can provide this page to your network administrator so they can get Grok Learning working on your network.

Uhoh! We couldn't send information to Grok. You won't be able to use our site.

This is most likely happening because you have a browser extension that's interfering with our requests. Try disabling any extensions and refreshing the page, or use a different browser.

If you're still having trouble, contact support@groklearning.com and let us know what browser and operating system you're using. For more information, see our documentation. 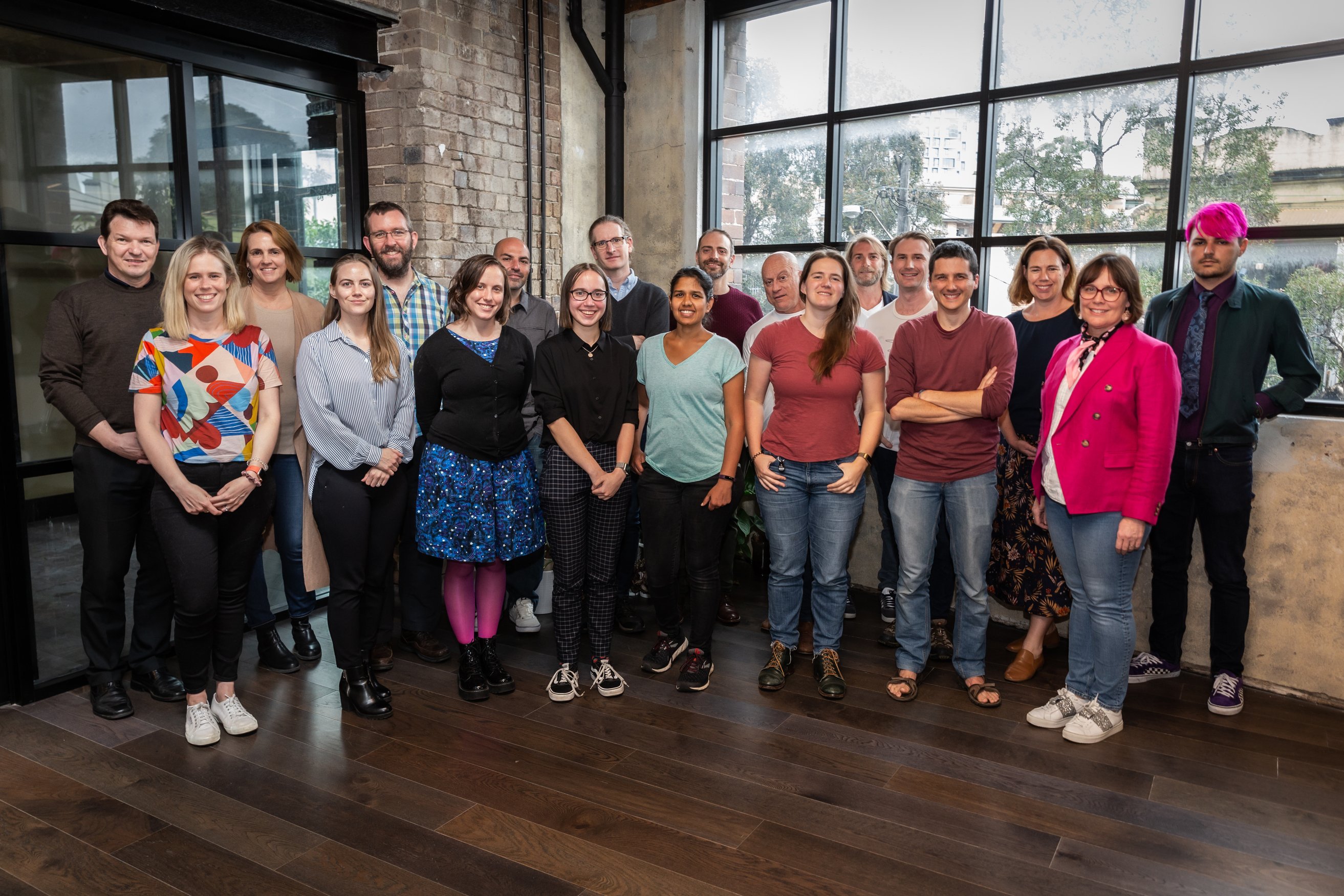 Grok (verb): to understand intuitively or by empathy.

We're a team of educators and software engineers who want to give everyone the power to code. We are passionate about teaching the next generation the skills they need to become the creators of tomorrow.

Together we have decades of experience teaching computing to university students, high school students, teachers and professionals. We're masters of the latest technology, and we use that mastery to help students learn.

We believe that a solid computer science understanding is vital whether you want to fight climate change, make the next blockbuster movie or unlock the secrets of the universe.

We've taught thousands of students across Australia to program in classrooms, lecture halls and online, and are now bringing top-notch STEM education into classrooms and homes around the world.

Dr. James Curran is the CEO of Grok Academy, a charity that combines Grok Learning and the Australian Computing Academy from the University of Sydney, where James was an Associate Professor in Computer Science.

Grok Academy’s mission is to educate all learners in transformative computing skills, knowledge and dispositions, empowering them to meet the challenges and seize the opportunities of the future.

James is Director of the National Computer Science School, the largest computer science school outreach program in Australia. Last year, over 22,500 students and teachers participate in the 5-week NCSS Challenge.

James was a writer on the Australian Curriculum: Digital Technologies and consults with curriculum authorities around Australia. In 2014, James was named ICT Leader of the Year by the ICT Educators of NSW and the Australian Council for Computers in Education.

Kylie Williams is Head of People and Customer at Grok Academy Limited. A graduate of the University of Sydney, Kylie has extensive experience in the not for profit and university sectors having worked for the Cancer Council NSW, the Lowy Institute and more recently with the ARC Centre for Excellence in All-sky Astrophysics (CAASTRO). Kylie is passionate about developing and implementing effective organisational structure; assisting the employees of Grok Academy to achieve their professional goals; enhancing relationships with new and existing clients; and commercial development of Grok products.

Lisette Tennant is the Head of Finance and Partnerships at Grok Academy. With a background in finance, she has held various management roles in the UK and Australia in the hospitality, media and entertainment, banking and tertiary education sectors.
She has a Graduate Certificate in Business and Technology, University of New South Wales, and a Bachelor of Business (Accounting), Macquarie University. She is also a Certified Practising Accountant (CPA). Lisette is responsible for improving the operational systems, processes and policies, and driving initiatives that will contribute to long-term operational excellence.

Karsten Schulz is the Head of Projects and Analytics at Grok Academy. Karsten has a PhD in Computer Science and a Bachelor in Electrical Engineering with a focus on Software Engineering. For 10 years, Karsten led the research division of a large multi-national ICT company in Australia and the Asia-Pacific Region and between 2013 and 2016 he led the national Digital Careers Program. In 2010, Karsten created the Young ICT Explorers Competition and in 2014 he founded the Bebras Australia Computational Thinking Challenge which is part of the international Bebras Challenge.

Geoff completed a Bachelor of Information Technology from Queensland University of Technology and has worked in a number of roles since. Geoff has accumulated a wide range of experience and skills including software engineering, cyber security, cloud computing and developer experience but is always looking to learn more.

Jane graduated from the University of Sydney with a Master of Teaching and a passion for creating compelling and meaningful learning experiences. After many years making maths education games at Shiny Things, she joined the Grok Learning team. She is completely new to programming but loves the opportunity to learn new skills. She hopes to make programming education more accessible so that more people can have just such an opportunity!

Bruce Fuda is Head of Education (Curriculum) at Grok Academy and the Project Lead on the Schools Cyber Security Challenges Project. Prior to joining Grok Academy, he has held jobs in Secondary Schools and the University sector, working as a teacher, Head of Department and Associate Principal, and lecturing in Masters programs.
Bruce has over 16 years experience working in education and teacher training, teaching all years levels from Year 6 through 12, and working with both pre- and in-service teachers. Bruce was a member of the advisory group for the writing of the Australian Curriculum: Technologies, and later joined the writing team for Digital Technologies during the consultation and review process.
He was the 2016 ACCE/ACS Australian ICT Educator of the Year, and was awarded an ISTE Making IT Happen award in 2017. He is the founding President of Information Technology Educators ACT.

Adam has over 10 years of sales and customer experience throughout the Education sector mainly in Higher Education, but is looking forward to working with schools and help grow a space that has huge upside.

Bianca graduated from the University of Sydney in February 2022 with a Master of Education in Digital Technologies. Prior to this, she worked as a primary school teacher in Queensland schools. She is passionate about engaging and educating students and teachers in the area of Digital Technologies.

Christie graduated from the University of Sydney with a Bachelor of Advanced Science and a Bachelor of Arts. She has worked in education and outreach for a number of years with organisations including Questacon - The National Science and Technology Centre, Astronomers Without Borders, and Sydney Observatory.

Craig Carroll is the graphic designer at Grok Academy. He has a Bachelor of Education (Visual Arts). With over 20 years experience, he has worked in magazine publishing, fashion, outdoor media, brand and marketing services at The Unviversity of Sydney, as well as a working for a number of freelance clients. He has also presented to TAFE students on the Graphic Design industry and career placement.
He has won a number of awards including the Australian Publishers Award for Best Special Edition in 2014 for EmpireTV, Best Youth and Entertainment Cover Maggies 2013, and Best General Interest title in 2009 and 2012. He was also a Finalist for The Maggies Magazine Cover of the year 2014.

Dominic completed a PhD in Physics at the University of Sydney. While studying, they became enamoured of teaching while doing tutoring and demonstrating work. This passion was cemented during their time working as a science educator at the Museum of Applied Arts and Sciences, teaching students of all ages about science and technology.

Isaac is a software engineering intern who has worked for Grok as part of the support team since 2020 and has now joined the development team as an intern.

James has been happily programming since discovering the Usborne computing books in his primary school library. Most recently working at Atlassian, he is thrilled to again be involved in education, having tutored computing at university and had a brief former life as a secondary English teacher.

Kristina came to Grok after working in the IT industry for 10 years. She has a Master of Computer Science from Masaryk University in Brno. Kristina has a knack for user experience and user interfaces. She is passionate about both design and code and finds the front end the sweet spot in-between.

Matthew completed his Software Engineering degree at UNSW. Before coming to Grok, he worked at UNSW as a course administrator, lecturer and tutor. He is passionate about making technology education the best it can be!

Nathan is a computer engineering graduate from UNSW. During university, he was a university tutor and loved the experience of helping others learn about programming and technology. This led to his interest in ed-tech startups and wanting to join the team at Grok!

Owen Brasier is a Lead Educator at Grok Academy. Owen was previously the manager and technical lead of MadMaker - an outreach project that teaches STEM skills through programming and has engaged over 2,500 students and teachers. Owen is an electrical engineer whose passion is teaching students to create and build technology to improve the world around them.

Penny Player is an Intermediate Educator at Grok Academy. She previously coordinated Zero Robotics (Australia) at the University of Sydney, an international competition giving high school students the chance to program robotics satellites on board the International Space Station. Penny has a Bachelor of Mechatronics (Space) Engineering and Physics, and has a passion for exploring the world and learning new things.

Rob is a former secondary teacher with over 17 years experience in regional Western Australia, running the gamut of computing subjects from Year 7 Digital Media through to Year 12 Computer Science. He has a passion for learning at all levels and enjoys engaging with fellow educators running and engaging in professional development, mentoring students ranging from primary to secondary at his local Coder Dojo chapter and developing his own understanding of technology and its intersections with other disciplines such as art and engineering.

Saritha completed her Computer Science degree at the University of Sydney. She’s worked in a few different roles finding herself most at home in the government and non-profit sectors working in data analytics, and is excited to be working in a team that is passionate about changing computing education for school kids everywhere.

Sujatha is a Lead Educator at Grok Academy. Previously, she was a lecturer at the University of Sydney, designing and teaching units in the Master of Education (Digital Technologies) program. With a background in secondary computing and humanities teaching, she has worked with students and staff in K-12 and helped establish programs including after school code and robotics clubs. Sujatha’s interests include project based learning and how technology can be meaningfully integrated into education.
Prior to teaching, Sujatha worked in the IT industry as a software developer and technical team lead. She is passionate about finding opportunities for every student to experience success in their educational journeys.

Josephine Spongberg is Grok’s Senior Events Manager, overseeing the administration of the NCSS Summer School, the NCSS Challenge and the Girls’ Programming Network. Prior to Grok Academy, Josephine worked in the tertiary sector for 25 years.

Any questions? We'd love to hear from you.

Send us a message